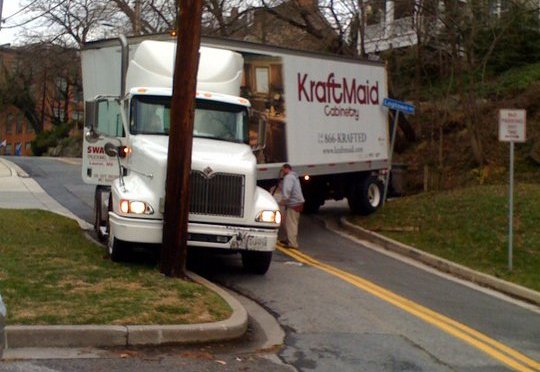 Bad writing is as easy to spot as bad paving and bad driving on my street. (Photo: Ilse Munro)

This piece was posted on 8 February 2013 in Little Patuxent Review.

At a recent book bash, I became increasingly incensed by a bunch of editors carrying on about bad writing. Who do these elitists think they are, making pronouncements about what constitutes a crappy manuscript? I’m becoming convinced that all they want is to prevent people like me, who won’t waste time obtaining an MFA, from joining their exclusive club. You seem like a sensible sort. Wouldn’t you agree that bad writing lies entirely in the eye of the beholder?

I am indeed sensible, so I do agree. Bad writing lies in the eye of the beholder. Every beholder. Smack-dab in the eye, making it as easy for even an editor to spot as, say, bad paving.

You see, while I reside in a picturesque place, the road that takes me to and fro is far from pleasing. And the imperfections there are painfully apparent to me even though I never wasted time obtaining a civil engineering degree or even accruing the minimum qualifications required to apply for a flagger position on a respectable road crew. And they are obvious to everyone else in the environs except, apparently, the poor paver.

What often jumps out first in both bad writing and bad paving is a lack of proper preparation. If a surface is cracked or offers inadequate structural support and our writer refuses to lift a finger (or move a mouse) to correct this, defects will inevitably emerge through the best-constructed overlay and consequent deformations can cause catastrophic failure.

If said writer isn’t ready in terms of craft, obtaining an MFA couldn’t hurt; however, if the shortfall concerns subject matter, graduate school rarely helps. An MFA hailing from, say, Chappaqua who decides to write stories about, say, meth labs in rural Michigan is at a distinct disadvantage to, say, Bonnie Jo Campbell, the author of the award-winning American Salvage, who’s lived in the Kalamazoo area all her life. (And, incidentally, has an MFA in creative writing, as well as a BA in philosophy and an MA in mathematics.)

And, while some would say that writing only about what one knows would merely result in a surfeit of stories about English professors seducing MFA students, those someones rarely insist that writers of such limited experience are as assiduous in filling the cracks in their knowledge as, say, Ian McEwan, who–at the height of his career–spent two entire years–as a matter of course–diligently work-shadowing a neurosurgeon before starting his critically acclaimed novel Saturday. (And, yes, he also has the equivalent of an MFA.)

Now, put a bad driver on that precarious pavement and there’s sure to be some serious trouble. You see, my particular road is narrow, sometimes turning into a single lane, with steep climbs and descents and sudden sharp turns. Inexperienced or impaired drivers readily put everything in their path in peril, as do those overconfident ones who do not show consideration for either objects or persons.

I see the former on my street, their shaky hands at the wheel, wandering across lanes, running out of road and rolling down embankments. The latter I remember from my Boston and Cambridge days, their trucks stuck under overpasses on Storrow and Memorial Drives along the Charles River, where conspicuous signs say, “CLEARANCE 11FT 0IN.” They’re the same ones that I now observe attempting impossible turns into access roads and ending up wedged between street signs and utility poles, their goods undelivered.

In bad writing, it’s equally easy to see when an author is out of control. Some use the excuse of automatic writing, citing Jack Kerouac’s notion of “first thought, best thought” and his refusal to revise. (And add that Kerouac was a college dropout.) But a closer look at good writers shows, more often than not, that’s a carefully crafted illusion. In her memoir, Joyce Johnson–who definitely did know Jack–revealed that he revised regularly and rigorously. Which is why his seminal novel On the Road didn’t end up in a ditch.

Similarly, it’s hard to miss the sort of bad writing that occurs when an over-confidant author under-delivers. I’m not referring so much to brash early efforts such as A Clockwork Orange that acclaimed authors later repudiate as to works penned at any point in a career that show little regard for readers because, apparently, such authors feel that they are so patently brilliant that they deserve a pass. Consider McEwan, whom I normally admire. With Sweet Tooth, he correctly calculated that clumsy contrivances used in lieu of more potent prose wouldn’t be called out by more than one or so critics the way that they would’ve been were he someone of lesser repute.

Bear in mind that at the beginning of each work–no matter how outré–the author enters into a contract with the reader to render certain goods, the literary equivalent of kitchen cabinets. When that author has the arrogance to violate that agreement through artifices such as dei ex machina, unlikely epiphanies or trick endings, the reader has the right to feel cheated. Not that I don’t delight in surprises. But they only constitute good writing when, as in minor masterpieces such as George Saunders’ “PUPPY” and Joshua Ferris’s “The Dinner Party,” the reader is complicit every step of the way.

Speaking of good writing, I maintain that the transportation analogy also works there. It’s as hard to miss as trains rumbling along the track across the river, parallel to my ruined road. In a Poets & Writers piece, one agent seconds what another put in his Publishers Marketplace profile: what he wants is a book that makes him miss his train stop. (Actually, subway stop, but that’s along the same lines.)

PS I could’ve added bad weather, which often comes from getting too much of an otherwise good thing, but then I would’ve had to address overwriting, which would’ve been a bit excessive here. Fortunately, that and other cases are covered by the likes of David Sedaris, George Saunders and Margaret Atwood in the video Bad Writing, which can be purchased for a pittance on Amazon.