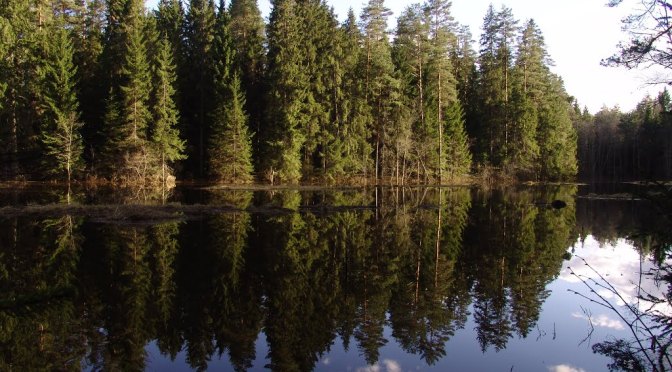 If you really want to learn about Latvia, I recommend that you visit the official site, which is very informative. Whatever I could personally provide would be rather childish, since I left there when I was about one month old and, for various reasons too complicated to explain here, have never returned. Still, I feel that I should give it a go.

From my perspective (with apologies to those who present a more comprehensive timeline), there are essentially five critical eras:

The small spot on the map that later became the Republic of Latvia had the great misfortune of being located between four major powers: the State of the Teutonic Order (later Germany), the Polish–Lithuanian Commonwealth, Sweden and Russia, which wanted, inter alia, access to the ice-free ports. In 1710, external control switched from Sweden to Russia, where it lay when my known history began.

Most Latvians were serfs. Serfs who ran away and lived in Riga for a year and a day without being claimed by their owners became free. There were other ways that this could occur, as well. My maternal great-grandmother (or her mother, I am not sure which) was a serf. She barely escaped being flogged for some trumped-up infraction because, according to family lore, she was both clever and beautiful. My great-grandmother, at any rate, eventually married a carpenter. I know nothing about other family members living during this time.

My maternal grandmother was born in Riga in 1879 amid the Latvian National Awakening. By the turn of the century, according to Michael Ignatieff’s book on Isaiah Berlin, this was how her hometown looked: “At the top of the social pyramid of Tsarist Riga were the Baltic barons, Russian-speaking Germans . . . Next came the Jewish Merchants and the Jewish professional classes . . . Beneath them came the Jewish artisans . . . At the bottom were the Latvians: recently urbanized country people, with a peasant culture. They represented the majority, yet were disenfranchised in their own land.”

Around the time that she married a Swedish engineer, the 1905 Russian Revolution arrived in Latvia. It turned residents against both the Russian government and the German gentry. Russia sent punishment squads welcomed by Germans. Insurgents were executed, and thousands were either forced into exile or fled the country.

My father was born in 1907 on a farm in Cesis large enough to require field hands and servants, where he purportedly led an idyllic life. World War I started in 1914. Soon, half the country was occupied by German forces; all fell under German control in 1918. Some 700,000 Latvians became refugees, most of them fleeing to Russia.

My mother was born in Riga in 1915. She and her parents moved to Kharkov, where her father managed a chemical company. When the real Russian Revolution broke out in 1917, her father was taken to the courtyard and shot by insurgents. My grandmother, pregnant with my mother’s brother, returned to Riga, where her rubles were worthless. To survive, she sold hot sausages on the frigid streets.

Latvian independence was declared in 1918, a week after the WW I armistice but before the German occupying force had left. The Soviet Army also threatened the fledgling state. Riga was taken, and the provisional government retreated to Liepaja. A complicated struggle among Latvians, Russians and Germans ensued, but the Latvians ultimately prevailed. A national constitution was adopted in 1922.

By then, a slew of educational and cultural institutions had been established in Riga, including the University of Latvia, which my father attended. My mother went to German schools, which were still deemed superior. My grandmother made a marriage of convenience in order to manage her second husband’s pension on the Baltic Sea.

Prime Minister Karlis Ulmanis dissolved Parliament and established an authoritarian régime in 1934. Secret agreements were formed with both Germany and Russia. By the start of World War II in 1939, some 25,000 Soviet troops had been stationed in western Latvia.

In 1940, the Soviets occupied the entire country, declaring it the 15th Republic of the USSR. The next year, 15,000 Latvian citizens were deported to remote regions of Russia; in all, 25,000 Latvians become victims of the one-year Soviet rule. On the orders of Adolf Hitler in 1943, young Latvian men, including my mother’s brother, were conscripted into the Latvian Legion to battle the Russians. But the victory was short-lived; Russians re-entered Latvia in 1944.

I was born in 1944 in Valmiera, where my father worked as an administrator and my mother as his assistant. German troops withdrew; the Red Army retook the town, burning down a third of the houses and nearly the entire historical center. My parents, my grandmother and I left Latvia. Other relatives also left; a few stayed.

Germany fell in 1945, and the German army in Latvia surrendered. Soviet repression extended throughout Latvia. Tens of thousands of civilians were arrested and transported to prisons and labor camps. That included my mother’s brother, who was sent to a gulag in Kazakhstan. A second deportation of 44,000 people focused on Latvian farmers who do not want to collectivize and partisan supporters.

Three occupations, many mass deportations and the war took a total of some 500,000 lives in little Latvia. About 120,000 Latvians who had escaped to the West, including my family and I, refused to return to a Soviet-occupied country and elected to resettle elsewhere.

I was a displaced person living in Grand Rapids, Michigan when we received heavily redacted letters from my uncle. After Joseph Stalin’s death in 1953, many were allowed to return but remained traumatized for life. My uncle was one of those. He decided not to go back to his wife in Riga and started a second family where he was.

With the birth of my son in 1966 in Ann Arbor, Michigan, my history again recedes into uncertainty, since I gave him up for adoption and do not know if he was ever even aware of his Latvian heritage.

Resistance to Soviet rule grew. In 1986, a human rights watch group, Helsinki-86, was founded in Liepaja and organized an unsanctioned event at the Freedom Monument in Riga to commemorate the victims of mass Soviet deportations. Other protests followed. The Latvian National Independence Movement and the Latvian Popular Front were established in 1988. The Baltic Way event, where approximately two million people joined hands and formed a human chain from Tallinn to Riga to Vilnius (370 miles), was held in 1989.

3 thoughts on “My Native Land”