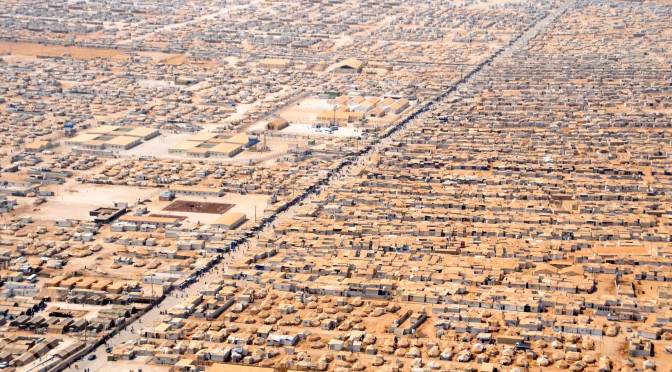 The Za’atri camp for Syrian refugees as seen on 18 July 2013 from a helicopter carrying Secretary of State John Kerry. (Source: State Department)

By the end of World War II, when I was less than one year old, there were more than 40 million refugees in Europe. According the latest statistics from the Office of the United Nations High Commissioner for Refugees, formed in 1950, a few months after I arrived in the States, the number of persons currently seeking protection within or outside their countries’ borders exceeds 5.9 million. It is not surprising that numbers of such magnitude become mere abstractions. It is, therefore, the purpose of this site to put a human face on statistics so that others can no longer look away quite as comfortably.

When I participated in a workshop, the leader referred to the novel that I was writing as “historical.” It troubled me that a story set in an era that I had personally experienced could be categorized as something apart from contemporary life. I wanted to tell her that those of us who have been marked by war, devastation and displacement are not the same as those who have not been and that my fiction was an attempt to stop pretending otherwise. And that what had happened to me, my family and so many others will continue to occur until we are willing to acknowledge that the past remains part of the present.

While this site is set up to present my stories and issues related to turning them into compelling literature, I hope that others who have been displaced by war and oppression will also want to participate, sharing their stories and processes in the posts that I plan to publish.