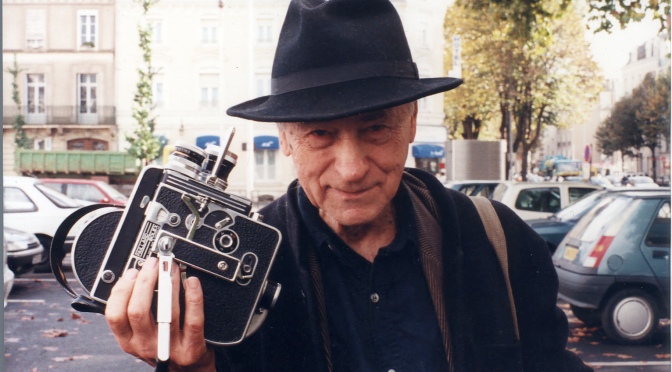 “I grew up in paradise,” Brooklyn-based Johas Mekas says, referring to the Biržai area on the Lithuanian–Latvian border. “Then the Soviets came and they brought Hell.” That precipitated a series of events that turned him into a displaced person, brought him to the United States and made him the filmmaker—often called “the godfather of American avant-garde cinema“—and all-around artist he is today.

Within weeks of his arrival in 1949, he borrowed enough money to buy his first Bolex 16mm camera and began recording his immigrant experience. One result was the 1976 film Lost Lost Lost, which a New York Times reviewer described as “one of the finest” among his many achievements, “a beautifully constructed diary film . . . At once rough-hewn and delicate.” On his site, Mekas describes the film as follows:

The period I am dealing with in these six reels was a period of desperation, of attempts to desperately grow roots into the new ground, to create new memories. In these six painful reels I tried to indicate how it feels to be in exile, how I felt in those years. These reels carry the title Lost Lost Lost, the title of a film myself and my brother wanted to make in 1949, and it indicates the mood we were in, in those years. It describes the mood of a Displaced Person who hasn’t yet forgotten the native country but hasn’t gained a new one. The sixth reel is a transitional reel where we begin to see some relaxation, where I begin to find moments of happiness. New life begins. What happens later, you’ll have to see the next installment of reels . . .

Since we are in the midst of the worst refugee crisis since World War II and many seem to be confused and conflicted about what America should do about the masses of displaced people, I would like to show how the nation that allowed me in during 1949 has benefited from some of my fellow refugees. So, I will let Mekas tell you his story, as he did a few years ago, and show you around his Williamsburg studio:

Note: There are clips from Lost Lost Lost available on DailyMotion and YouTube, and the entire film is can be purchased on DVD from his website.

One thought on “Lost Lost Lost”