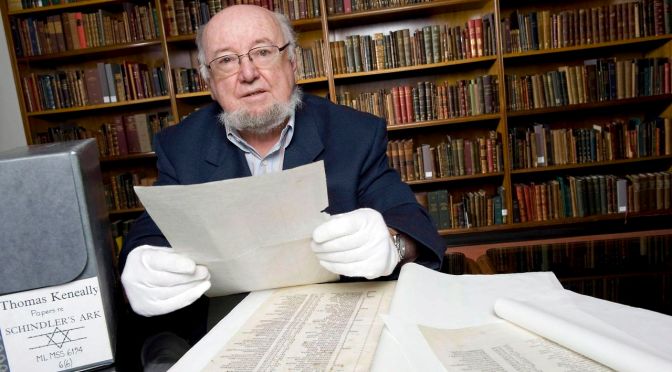 According to Oxford Dictionaries, a fact is “a thing that is indisputably the case.” I like this definition because it does not grant facts an independent existence; rather, it implies that some sort of consensus is required. Since dispute is possible, facts have a precarious existence. The same source also gives fiction a dependent definition, making it, more or less, an antonym of fact. But if facts can be disputed, just where does that leave fact relative to fiction? Even with my scientific background, I am forced to concede: not all that far.

Some make a distinction based on imagination or intent. But a book such as Thomas Keneally’s Schindler’s Ark, based on extensive historical records and eyewitness accounts with mainly the dialog qualifying as intentional imagination, is classified as a novel. (In this case, one worthy of winning the 1982 Man Booker Prize for Fiction.) Yet his Searching for Schindler: A Memoir, similarly fact-based and full of dialog not likely transcribed verbatim from notes, is classified as nonfiction. Which makes the distinction, if not moot, a matter of degree.

Early in my writing career, I resolved to call everything “fiction.” Even though I was one of those write-what-you-know writers. Even though the stories that I was preparing for the collection Cold and Hungry and Far From Home were an attempt to approximate the truth of what had transpired in my life and that of those around me. Even though when I really let loose in works such as my novel Anna Noon, every character, every location was initially based on what I had actually encountered at some point in my life. Even the imaginary cat was based on a cat I had first created for my mother’s amusement.

But I did more than apply a particular label; I–first unwittingly, then deliberately–adopted an identifiable style that told the reader, “Hey, this is just a story.” The narrator of my first published story, “Making Soup,” was a one-month-old infant. The narrator of my second novel progressively encroached on the tale he purportedly told about the eponymous Anna until she became all but invisible. This and more puts what I do in with postmodern literature, which gained prominence during the post-World War II period and is represented today with works such as Thomas Pynchon’s 2013 novel Bleeding Edge.

This makes it possible for me to warn readers away from expecting any more than “fictional truth,” sufficiently powerful in its own right. But, as Michael Riffaterre, who has addressed this topic exhaustively in regard to works of intentional imagination, acknowledges, “All literary genres are artifacts.” This, I maintain, includes essays (and, more recently, blog posts), which, while often written from the author’s personal point of view, frequently encompass the factual.

When I started writing essays a few years ago (and editing those written by others), I immediately gained a reputation as a fierce fact-checker. But while doing that, I was always aware of how deceptive facts could be. Of how shaded my truth became after selecting some facts and excluding others. Even after selecting one word over another, perhaps simply because I liked how it sounded in a sentence.

So, reader beware: if it comes from me, in whatever form, I would prefer that you consider it to be fiction. Even this particular piece.

Note: Since I posted this piece, I came across an interchange between Geoff Dyer and Matthew Specktor that had been excerpted in McSweeney’s from The Paris Review, where Dyer also refuses to make a major distinction between nonfiction and fiction, insisting that “the two are bleeding into each other all the time.”